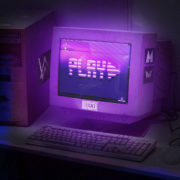 No matter who you are or where you are from, there are moments where everyone finds themselves longing to escape reality. For many, music serves as that figurative time-out. K-391 conceptualizes your musical getaway in the shape of a unique headset. K-391 is the creation of the mysterious character K, a creative prodigy who birthed K-391 with an ambition to enable people’s escape from reality through music as the vehicle and the destination only limited by your imagination. K-391’s musical universe is the soundtrack to engaging narratives told through visual content across multiple platforms. It is an audiovisual experience inspired by all walks of life – including music, gaming, film, technology, architecture and vintage futurism.

Having shared 30+ songs online for the world to enjoy for the last couple of years, K-391 amassed over 50 million streams and more than 3 million followers across social media before a commercial debut single was released. It came in the form of Ignite, an energetic collaboration with artists Alan Walker, Julie Bergan and Seungri. The single racked up 350 million audio and video streams in the first 6 months since its release in May 2018. Today, K-391 counts a total of 730 Million audio and video streams world-wide.

In November 2018, K-391 released his follow-up single Mystery, featuring global superstar Wyclef Jean. The single is a heart-warming declaration of love, written from a father to his young child.

In August, K-391 is back with another single, this time collaborating with Tungevaag, Alan Walker and Mangoo on a relift of the EDM classic “Eurodancer”.