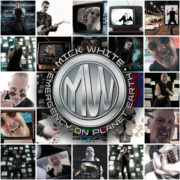 The story so far,.. As a one time member of Samson Mick White had played most of the UK’s premier venues at the tender age of eighteen. He’d supported Iron Maiden on their mammoth UK trek for the “Somewhere In Time” tour and also had a wealth of writing and recording experience for someone so young.

Following his departure from Samson in 1989 White formed First Strike and continued to write, record and tour his way around the UK including tours with Uriah Heep, Giant, Dare, Slaughter, Shy and many others making videos and headlining shows at the Marquee in London. The future was looking bright with major record company interest and an impending management deal with a big American management company until the grunge movement happened and virtually changed the music landscape overnight.

After First Strike split White found his talents were very much in demand in the studio and spent the next five years doing session work across various studios in London. Towards the end of the nineties White started writing again and was offered a deal with US record company Domo records. This became the band Seven Days who went on to release two singles recorded in London and mixed by Kip Winger at his studio in Sante Fe.

As the new millennium began White drifted away from music for a period of time finding no inspiration in the direction music was taking as rock went further underground.

In the Summer of 2019 White was approached by Steelheart Records to finally get a release for the First Strike album. ‘Just Another Night’ was released in October and was greeted enthusiastically by rock radio and fans with three pressings of the CD selling out and a digital release early in 2020 also doing very well.

During the Autumn of 2019 White guested on a track called “Better Be Strong” written by German songwriter “Marty Punch”. Drummer Carsten Enghardt also played on the song and on hearing the vocal knew straight away he was the man his band Endfield were looking for. Phone calls were made and after agreeing to join the band Mick added lyrics and melodies to the tracks over the next few months. In January 2020 Mick flew out to Munich to record the vocals at 1st take Studios where a further two songs were also written and recorded and the ten songs were now finalised for the new album.

As the global pandemic hit White found time to start writing a solo album enlisting the talents of guitarist Luke Hatton and Endfield bandmate Carsten Enghardt. Eleven tracks were recorded mostly co-written by White/Hatton but also including ‘Don’t Close Your Eyes’ a song co-written with Paul Samson in 1988, a reworking of the First Strike song ‘ Hold Tight’ and a new version of ‘Better Be Strong’. All vocals, guitars, bass and keyboards were recorded in the UK with drums added at 1st take Studios where it was also mixed by Carsten and Ulrich Hilbel.

The album is an unashamedly classic rock album with big guitars, drums and vocals but all wrapped up in a modern production which sits perfectly in the modern rock sound. This is perfectly demonstrated by the first single ‘Emergency On Planet Earth’ set to be released digitally worldwide through Enghardt Media/EDEL Records on the 8th October alongside an accompanying video directed by James Ross Heron from Carriage Return Media Services.

The Ghost And The Machine – Alice in Contraland
Nach oben scrollen