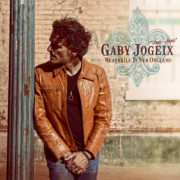 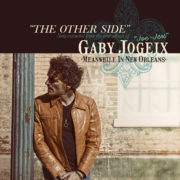 After his successful album „Hermosa Beach“ (2013) we can now look forward to the new album „Meanwhile In New Orleans“ by Gaby Jogeix, which he recorded, mixed and mastered in New Orleans. Gaby Jogeix returns to Spain after traveling to New Orleans, a key city for the development of his new work, which will be released in 2020. Thanks to his relationship with Kenny Neal (Baton Rouge, Louisiana), with whom he collaborated in 2003, and to musical trends in this city, the artist now fulfills one of his goals: to integrate new sounds and voices into his songs. With „Meanwhile In New Orleans“, the artist shows his wide range and his influences. The third single release „The Other Side“ is a groovy, strong track, which is available on all online portals worldwide on April 9, 2021 via Enghardt Media / Edel Music.

„Gaby Jogeix’s „Meanwhile in New Orleans“ it’s nothing but the Real Deal !!! Southern soul, groove and sexiness are the bleeding thru all its track like you would expect and hope you’d get from a record like this. Gaby won us over and now we’re big fans !“
Supersonic Blues Machine 2019

“Gaby’s latest release is destined for true greatness. This album takes you on a soulful, funky, rocking ride. From the ever soulful Fair Green to the beautiful ballad I’m gonna get there. I love the gospel influenced Preaching with its super thick groove will make you get up and dance. This album has a wonderful flow to it and a great mix of grooves and fantastic story telling. I highly recommend it!”
Kirk Fletcher

“Sounds really rough and soulful, strong! I am happy to see that there is still music and guitarists who let their boards „suffer“.
Aichacher Zeitung

“ (…) The musical diversity of Gaby Jogeix is his strength, he has a great gift to integrate new currents , sounds and voices in his songs. It sounds inspired, intense, complex and dynamic. And when he enters the blues „Keep Your Laps“ at the end, the world is more than all right“.
Good Times Magazine 2-21

“For his musical abilities he is much too unknown and also the internet does not give enough reveal. „Hermosa beach“ appeared 2013 and in 2006 came an outstanding blues album with the title „Steel the blues“ on the market. In between I have not heard anything from him and and with the new album every note is a perfect homage to the blues genre and to New Orleans in particular. A great dexterity, surprising melodic arcs and always and again this haunting guitar. A great album with the necessary feeling.
Musiker Magazine