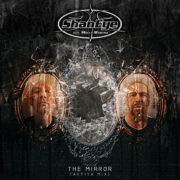 Shane, one of the lyrical masterminds behind the legendary HeadCrash (post hardcore/crossover), Lungbutter (industrial/punk/metal) and Peace Officer (dub-hop) has teamed up with Shadow, longtime friend and journeyman, frontman for Blast Furnace and producer for beatzMafia, to deliver brand new tracks. Shane disappeared for the better part of a decade, only to resurface in the most trying of times, with blisteringly critical lyrics and vocal performances that rival his best work, spanning 30 years as a vocalist and live performer.

The Mirror looks at the biggest flaws that humans don’t want to face: themselves. We don’t learn from it, yet we hang from it, now it’s swinging from the tree like a bag of vomit.