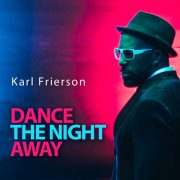 Single – Dance the night away

After 20 years of international success with the Jazz / Lounge project DE PHAZZ, Karl Frierson is back with his sophomore solo album „Cooking Up Soul“!

The American frontman, lead singer, songwriter and entertainer with his first solo album „Soulprint“, attained not only UK Dance Chart status, but reigned two weeks #1 in the UK Soul Charts and Karl  highly celebrated in Eastern Europe Russia and parts of Asia with „popstar“ status

The new sound of Karl Frierson is brilliantly fresh and powerfully resonant which is a very original blend of Soul, Funk, and Mowtown covered with modern and sophisticated arrangements.

The album „Cooking Up Soul“ was recorded in Los Angeles and Germany. It will be released in early Summer  2017.

The video to the upcoming single „Dance The Night Away“ was shot on Riga, Latvia co starring his beautiful and talented actress daughter, Pauline Frierson.